This is the second post on how to accelerate Python with Cython. The previous post used Cython to declare static C data types in Python, to speed up the runtime of a prime number generator. In this post we shall be modifying a more complex program, one that performs an image transform on a map. This will allow me to demonstrate some more advanced Cython techniques, such as importing C functions from the C math library, using memory views of Numpy arrays and turning off the Python global interpreter lock (GIL).

As with the previous post, we shall be making a series of Cython modifications to Python code, noting the speed improvement with each step. As we go, we’ll be using the Cython compiler’s annotation feature to see which lines are converted into C at each stage, and which lines are still using Python objects and functions. And as we tune the code to run at increasingly higher speeds, we shall be profiling it to see what’s still holding us up, and where to refocus our attention.

Although I will be using Python 3 on a Mac, the instructions I give will mostly be platform agnostic:  I will assume you have installed Cython on your system (on Windows, Linux or OS/X) and have followed and understood the installation and testing steps in my previous post. This will be essential if you are to follow the steps I outline below. As stated in the previous post, Cython is not for Python beginners.

END_OF_DOCUMENT_TOKEN_TO_BE_REPLACED

This longer post will show you some of the coding skills you’ll need for turning your existing Python code into the Python-C hybrid we call Cython. In doing so, we’ll be digging into some C static data types, to see how much faster Python code will run, and restructuring some Python code along the way for maximum speed.

With Cython, all the benefits of Python are still yours – easily readable code, fast development cycles, powerful high level commands, maintainability, a suite of web development frameworks, a huge standard library for data science, machine learning, imaging, databases and security, plus easy manipulation of files, documents and strings. You should still use Python for all these things – these are what Python does best. But you should also consider combining them with Cython to speed up the computationally intensive Python functions that needs to be fast. END_OF_DOCUMENT_TOKEN_TO_BE_REPLACED

This post continues my investigation into running standard Python on multiple cores using the concurrent.futures module. This time, I will be taking some image processing code from a previous post on the transverse Mercator transform and attempting to scale it to multiple CPUs.

END_OF_DOCUMENT_TOKEN_TO_BE_REPLACED 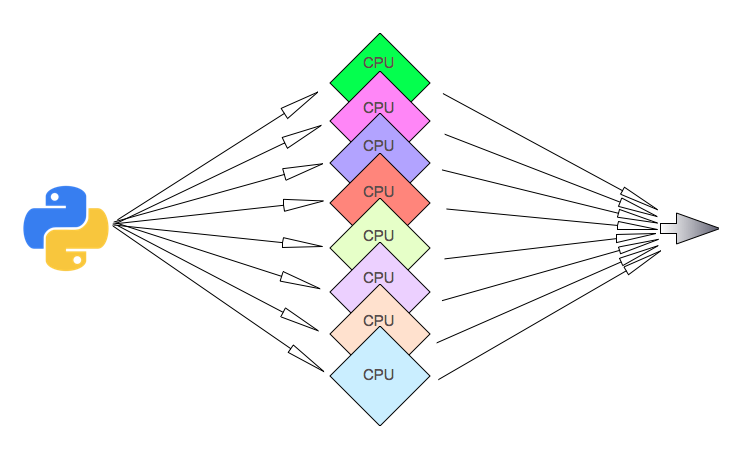 With the impending demise of Moore’s Law, multiple cores are a common manufacturers’ workaround for improving hardware performance, whether or not your installed apps can use the parallel architecture.

And with each new release of Python, parallel programming gets even easier. But the degree to which your code can use your multiple cores will depend on the kind of problem you are trying to solve, on the implementation of Python you are running and, as it turns out, how truly parallel the underlying architecture of your system actually is.

The goal of this series of posts is to see how adaptable some of my existing code is to take advantage of multi-core hardware, to see what changes need be made to scale it, and to measure the performance improvements from the exercise. END_OF_DOCUMENT_TOKEN_TO_BE_REPLACED